Dreaming of Death and Skara Brae

I am running through a large house and hiding, trying to protect myself from another tribe's magic-workers. I feel anxious and sad when I am finally found, because I know that I am to be put to death. As I am taken back out through the house, I look for a way out, an escape from my captors. I can't seem to shake them.
We eventually end up outside, on a large boat. I am being guarded as we head back to the other tribe's area (the imagery is of hunter-gatherer society, very early, and very Celtic-themed).
One of the seers from the tribe that has captured me takes a bird to the Chief/Captain, saying that "it is a good omen for them." It is declared a "Sea Eagle" and given to me, after the seer snaps its neck. I cradle the bird to my chest (heart chakra?) and observe it not to be dead at all, but wounded/disabled so that it can't really move or fly. I feel that I have to hide the bird's "aliveness" from my captors. I start thinking of magical ways of escape, such as using the bird's life to sustain mine when they put me to death.

Funny enough, the bird in my dream doesn't fully look like a Sea Eagle, but a more like a large black bird with an iridescent sheen on its wings, bright yellow eyes, and a long, black bill (kind of like a hummingbird-bill). So what do I do? Do I concentrate on the imagery that fits better with the Grackle, or listen to the words of "Sea Eagle?"  Or do I do some "shamanic homework" on both???

Back to the dream:
We land on the shore of the other tribe's land, but it is a weird mixture of ancient paths and spliced images from museums/anthropology sites. I can see the guards walk me down a footpath with the rest of the tribe, and there are about 30 of us, walking towards the town center. But as I look towards my left, I can see ruins of stone middens being uncovered by archaeology students; in the same space but not the same time (?).
I keep trying to figure out how to escape, but the captors aren't telling me anything, they aren't even talking to me. I'm hoping to learn how they plan to kill me, so I can figure a way out of it. At this point in the dream, I understand that my death is to stop a feud between two Shamans/tribes.
As we approach the town center, I see a couple of magical circles/designs on the ground: 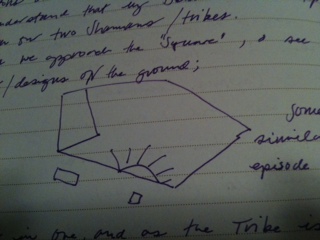 Yes, this totally looks like something from the ST:TNG episode in which Data wears many masks and becomes an entire indigenous culture's godforms...

I actually sit inside this wacky-looking magic circle thing (much cooler in my dream than in my poor drawing). As the tribe is talking (I can't understand what they are saying), I discover that I'm no longer desperate to escape, I'm now thinking about how I can die a "good death."  I'm going through Kubler-Ross' 5 stages of grief in rapid speed, and just as I reach a smidgen of acceptance, I turn my head towards the Chief/Shaman, as he/she is speaking to me now.

And I wake up.

Of course... the Dream ends without me knowing my fate, but reaching acceptance of Death as a Transition.
~~~~~~~~~~~~~~~~~~~~~~~~~~~~~~~~~~~~~~~~~~~~~~~~~~~~~~~~
I talked with my sister over the weekend, and she's able to pick up on some of the images right away. She immediately links me with the site of Skara Brae, a neolithic settlement on the Orkney Islands in Scotland. And I am blown away as to the similarities within my dream images! If you scroll down to the middle of the article, you'll see some of the Skara Brae images, which coincide pretty well with my wacky drawing above (wavy lines and the Sun)!

It's enough to make me want to pay attention and research this cultural settlement more, and to actually do an Active Journey and ask about my Ancestors.

The spiritual technique of cutting cords