So few people work with Coyote and his form of "Trickster Medicine" that I am excited to share a FREE LECTURE opportunity with you!

I am unable to upload the PDF file into Blogger (as it is not my flyer), so here is the relevant information:

Johns Hopkins Center for American Indian Health, in collaboration with Kenosis Spirit Keepers, presents "Coyote Medicine, Lessons from Native American Healing"
Thursday, January 15, Noon to 1:15 pm
Johns Hopkins Bloomberg School of Public Health,
615 N. Wolfe Street, Room 1020
The Lecture is being given by Lewis Mehl-Madrona, MD, PhD, author of Coyote Medicine and the Coyote Trilogy
This talk is free and open to the public.
To reserve your space you must contact Nicole Pare at Johns Hopkins University, by phone at 410-955-6931.


It may be tricky for some to attend a lunch lecture in downtown Baltimore on a Thursday, but I'd love to see you there!
- November 30, 2014 No comments:

Coyote blabs about the Secrets of Sedona's Vortexes! (Arizona II)

Sedona, AZ is known for its vibrant Red Rocks, evergreen forests, and incredibly blue skies. It is also known in "New Age Circles" for its Vortexes-- areas of energy that can have a profoundly healing effect on the human body, mind, and spirit.

With the length of time I had for this vacation, I wanted to visit the main four: Airport Mesa vortex, Boynton Canyon Vortex, Cathedral Rock Vortex, and Bell Rock Vortex. There are numerous maps to the Vortexes, and I drove my rental car to the furthest one (Boynton Canyon) early one morning.

I began walking up the path, looking for signs to signal when I'd reach the Vortex area. I hiked for a solid hour, retracing my steps and re-checking my map(s).

There were no signs for the Vortex. In fact, after speaking with local friends, I learned that NONE of the Vortexes are labeled at all! It seemed to be a small joke on the New Agey tourists who came to Sedona specifically for the Energy High: no one would tell anyone where the Vortexes were, but everyone maintained that you could "feel" them. Of course, the Unspoken Test was that if you couldn't "feel" them, then you weren't "advanced enough" or "psychic enough" for them... Although I was in Sedona for more than just the Vortexes, it seemed as though I was being tested as well (see below for my Personal Theory*).

Eventually, I put away my map and just hiked for the pure joy of it. I went to the end of a trail, climbed up a small rock face, and sat facing the morning sunlight. Very few people were on the trail yet, and so I decided to close my eyes and Journey to the Spirits of the Land.

Coyote immediately appeared, and began to introduce me to different Spirits (Hawk, Eagle, Lizard, Owl, Mesquite Tree, Creosote Bush; lots of friends!). We then both looked out into the Sky, and I saw the most amazing and colorful light display emanating from the sunlight. The Desert Guardian Spirit came to say hello, and I made offerings of friendship, gratitude, and pleas for safety while hiking in the area.

After that Journey, I opened my eyes, took a deep breath, and stretched my legs. I stood up, and prepared to climb down off of the rocks. My eyes were drawn to where my butt was:

There were quartz-like crystals within the Red Rocks! Quartz is a stone of communication, and its presence within only some Red Rock structures, but not others, gave me information about the sacredness of different areas of the desert (and hinted at the true locations of Sedona's many Vortexes).

In checking out the other main Vortex sites, I was able to find similar quartz-like crystals. Again, not in any marked areas, and only certain concentrations of Red Rock.
I believe that these physical manifestations of quartz within the stone are the true "signs" of Sedona's Vortexes. I was able to Journey while sitting atop lots of different outcrops, and found my visions to be colorful, clear, immediate in nature, and easily communicated.

*But what of my Personal Theory? I think that some small percentage of tourists, desperate for healing and communion with the Divine Nature Spirits, are either "pretending" that they can feel the Energy, or convincing themselves that they can if another person points it out (also known as projection). Additionally, the Vortexes have a reputation, and have developed a Thought Form around them. Some tourists may be feeling the energetic high of the Thought Form of the Vortexes, and not the actual energies themselves.

I do not understand the "status symbol" of "pretending" that one can feel the Vortexes when s/he can't, especially if many who come to visit are in need of healing. Sadly, it became a bizarre competition at my hotel's spa area...

I hope this article helps those who are searching out the exact locations of the Energy Vortexes (look for the quartz embedded in the rocks!), but are not receiving accurate information from maps or human guides. This was the only unpleasant experience that I had in Sedona.

Raven's Introduction to Sedona (Arizona I)


I arrived in Phoenix on October 27th, very jet-lagged from the 3-hour time difference. After driving two hours north, eating lunch, and checking into my hotel, I was eager to nap for a few hours. I closed all the blinds, kept the bathroom window open for fresh air, and laid down on the comfy bed. I set my alarm for 90 minutes, and closed my eyes.

I thought the air conditioning was trying to turn on, so I turned off the unit.

I had no idea what was making that sound, and got up and explored the bungalow. I looked outside:

Raven had come to welcome me to the Desert! Of course, immediately wide awake, I just had to go and talk with Him:

During my trip, Raven greeted me every single day, and often joined me on my long (4-5 hour!) hikes. He was super-playful, very Tricksy, and rather adept at manifesting Himself physically anytime I was struggling with a particularly difficult Journey or "Aha!" moment.

But what about Coyote? Where was He?

Sadly, I never saw a physical coyote while in the desert (not this time, at least). However, Coyote was present at each Journey, and gave me wonderful insight into the Desert, the Land, and His People. He was able to welcome me my first night, during my tour of the Night Sky. As our group sat on the freezing soccer field (open space needed for the telescope), I heard a giggle, then a yip, then a short bark. My ears immediately perked up, and I had a giant grin on my face. The tour guide said, "Well folks, we seem to have a pack of coyotes near us. Just stay with the group."  I laughed, and then the coyote voices exploded: at least 7 or 8 howled, barked, yipped, laughed, and sang.

Of course, I couldn't focus on anything else, and tears of joy froze halfway down my cheeks.

Stay tuned for the next blog entry, where Coyote tells me the Secrets of the Vortexes!

*Note: My offerings were given just off of the paths of parking lots (most of the time), to preserve to sacredness and beauty of the spaces. Additionally, I was a Guest with these Spirits, and was warned by many Natives to NOT leave offerings at the actual places (it is considered extremely rude and disrespectful by those who are of the Culture, and who work with the Spirits of Place directly).
- November 07, 2014 1 comment:

Join me for the next Open Journey class of 2020 ! We'll be meeting ONLINE  due to COVID-19. This group is open to anyone who has inter... 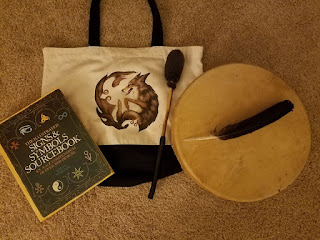